The painting “Inglorious Nocturne” by Holly Ann Sailors has provoked a strong reaction from many members of the Academy’s staff, faculty and student community.
To address the serious nature of these concerns, the Academy feels that it has a responsibility to its community to create a platform where all sides of this issue may be aired in a reasonable and respectful manner.
We have created this blog to encourage an open and honest dialog about freedom of expression and speech, the open exchange of ideas and the role that censorship plays in addressing provocative and controversial works in the arts.
- Peter Drake, Dean of Academic Affairs
________________________________________________________________________
While the faculty is not in total agreement about the success of “Inglorious Nocturne,” and hence of how offensive (if at all) it may be, we all applaud Holly’s ambition and courage in addressing such difficult subject matter. History painting, once the pinnacle of painting’s function, is now largely the territory of film and photography; contemporary art generally shies away from historical issues. Certainly racism is one of our history’s major quandaries: much of America’s early economic success is owed to unpaid labor, and some of the founders who gave such beautiful expression to notions of American independence were slave-owners.
The faculty also sees replacing the painting with one less inflammatory as counterproductive, partly because that would invoke censorship—even if the most salient examples in recent art history have involved public (government) monetary support, and The New York Academy is a private institution whose main function is to educate students. Most of all, avoiding these thorny issues would be missing the opportunity of a “teachable moment”.  As a school that promotes excellence in formal execution in figurative art, we hope that the discussion that follows of how and why this image provokes thought and emotion, will encourages students to challenge themselves in terms of content. We invite your comments.
- Margaret McCann,  Interim Faculty Chair
________________________________________________________________________ 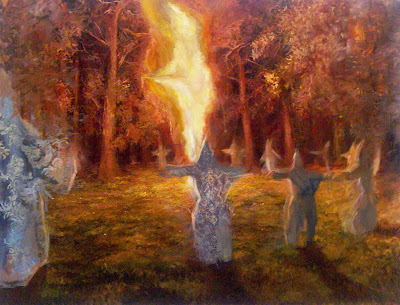 "Inglorious Nocturne "
oil on canvas   47"x 62"   2011
I understand that this artwork is creating controversy and discussion within the school community. I am very aware of the taboo nature of this imagery and realize the potential for it to be perceived as offensive.  This is not my intention.
In no way am I trying to perpetuate the ideas of this hateful community. Instead, I want to unveil a never-ending trend of hate, prejudice and disillusion that is present in our culture. In all of my work at this time I am interested in fully capturing the viewer's attention through beauty and seductive coloring that then forces them to witness horrific subject matter. Overall, I wish to bring awareness to current social issues dealing with racism, hate, and injustice.
This painting is fueled by an encounter with the Ku Klux Klan that I had as a child. As a 7 year old, seeing this event was life-changing and revealed to me the simultaneous connection of beauty (in this case the fire, the costumes, the ritual) with abject horror (the brutal treatment and murder of minorities).  The controversial figures depicted in my painting are ghostly cowards disintegrating into the darkness presented through a palette of attraction. I am continuing a southern Gothic tradition that uses art to explore social issues and sheds light on the cultural failures of the American South.
- Holly Ann Sailors , MFA 2012
_________________________________________________________________________
Examples of artwork dealing with controversial themes (some w/links): 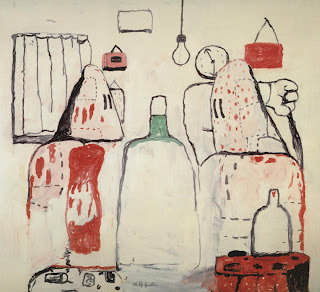 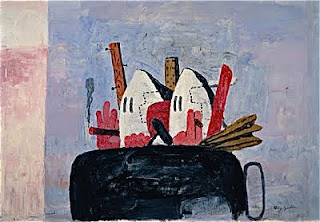 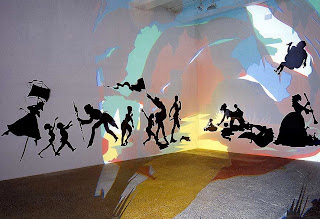 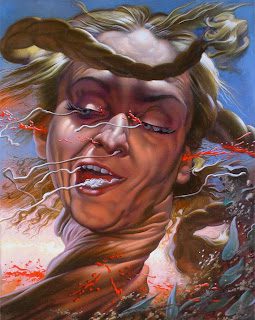 Comments welcome, anonymously is OK, too.
Posted by newyorkacademyofart on Friday, October 14, 2011