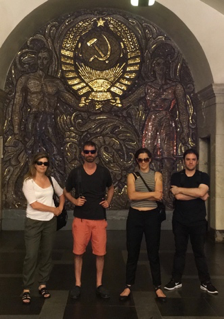 The icons. The light. The people. The food. The architecture. The history.  I find that every day I have a new obsession. Today it is the sound of the canal and the cool light on the pink and ochre buildings just outside our window; Monday it was the bursting fruit at the farmstand just over the footbridge -- actually, it was our greeting to St. Petersburg by the “district alcoholic” whose joie de vivre sent him leaping off the footbridge into the murky canal, fully attired in his clothes, combat boots, ruddy cheeks and infectious smile. His friends, and we, were so happy when he reached the stone steps back to land. He has since reappeared out our window to sing us to sleep at night. 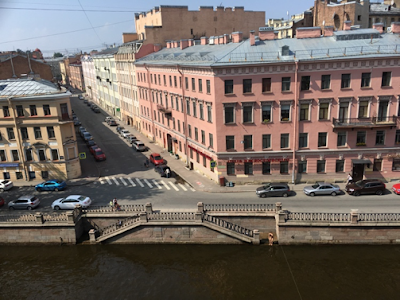 It is difficult to believe we have only been in Russia just over a week. We have seen, done, and tasted so much, it feels as if we have been immersed in this culture much longer.  Our first week was spent in Moscow – a week that I will remember for its intensity and vibrancy. Every day we traversed the city and absorbed as much as we could, visiting as many museums, churches, monuments, metro stations, parks, and abandoned buildings as our feet could handle. These excursions were peppered with adventure, such as climbing onto a rooftop so we could end our long day with an unimpeded panorama of the Moscow skyline and vertiginous view of Patriarch’s Pond, or following our guide, Nikita, into a restricted area of the Kremlin, so he could catch a Pokémon. At times, it felt like the most dangerous adventure was the check-out line at the “grumpy grocery” on the corner.  We survived and are stronger for it. 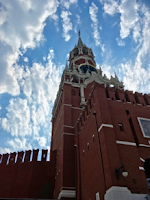 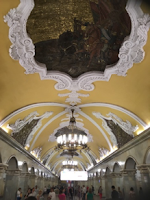 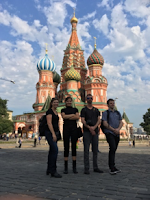 Particular Muscovian highlights for me were visiting the two State Tretyakov Galleries, in which we were able to see Russian art treasures spanning the early 12th century to the present.  In the first gallery, which highlights Russian art before the 20th century, we were able to take in a full array of Russian art history – their gorgeous, elaborate icons, history paintings, portraits, myths and heroes. Although European influence was often evident, I was constantly enthralled by the particular Russian flair for story telling, expression, and personality. 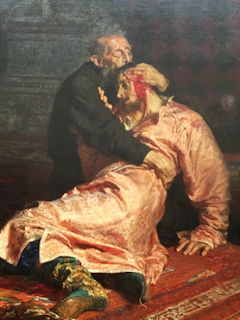 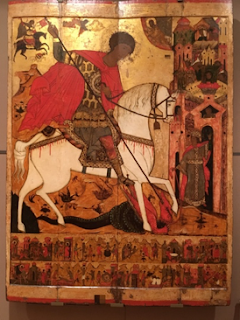 In the New Tretyakov Gallery and surrounding sculpture gardens, we saw a vast range of 20th-century Russian art -- the early 20th-century works being my favorite period both aesthetically and conceptually. Each immense room offered a new, mind-blowing experience of color, form, and experimentation. On a personal level, I was particularly fascinated by a room full of early Chagall paintings that I had never seen before. These paintings revealed that the themes, colors, and forms characteristic of his later works were ever-present in his early work, even as he experimented with the prevailing aesthetic and formal approaches of the time. Just when I thought I couldn’t be further inspired, I turned the corner and… Malevich!  It was then that I realized I had only seen a fraction of the museum – ahead of me, the Lenin years… the Stalin years…! I persevered but I clearly need to go back. 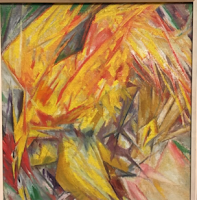 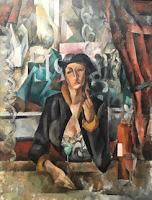 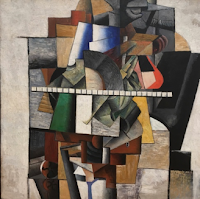 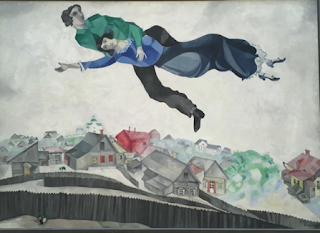 Perhaps one of the greatest experiences for me in Moscow was getting to know the family we stayed with while there. Not only did this give us a view into daily family life in Moscow and access to their opinions on Russia and the larger world, but also it gave us the opportunity to meet a truly extraordinary group of people. I was inspired by how warm, open, worldly, informed, and inclusive they were.  Given that they have seven children, there was constant activity and conversation in all corners of their apartment. Everyday new faces appeared around the table or in the little courtyard outside; we met some people who had never left Moscow, and others who were getting their PhDs in mathematics from Yale. There was never a shortage of interesting conversation or food, and there was always a massive pile of dirty dishes and empty bottles. 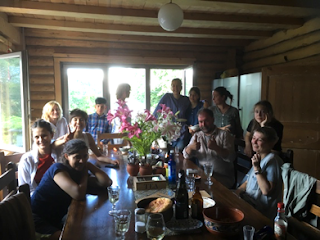 Towards the end of our week in Moscow, the family invited us to their country house in Tarusa – a 13th-century village that has been the site of many historical events and movements, including being a home for famous dissidents during the Soviet era.  Out of the city, we were able to relax and get to know the family and their broad group of friends. Much of the day was spent gathered around the dining table, helping chop food for the next meal, talking, eating, and drinking coffee, wine or vodka – or all three in no particular order. At any moment, several other people would stop by to say hello or eat, and often would end up staying the night – flexible sleeping habits, whether on a couch or in a corner, were essential. As one visiting man told me over his hot, delicious pumpkin soup, “large families are magic.” When not gathered around the table, the family took us around town to introduce us to their friends, many of whom are artists. We met a woman who paints vibrant floral scenes and portraits and who is the daughter of two famous artists of the Soviet era (one of her mother’s posters shown below). We met a performance artist and his circle of friends, who shared not only their whiskey, but also hilarious stories of living in Tarusa and rebuilding houses. We visited a foundation that supports a famous mosaic artist and hosts contemporary art exhibits, concerts, and workshops. We took a walk along the river, saw old churches nestled in ravines, and picked flowers and vegetables from small gardens. Indeed, it was magic. 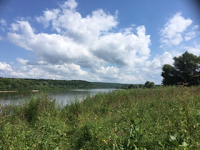 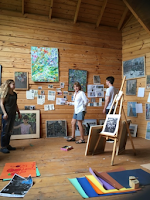 Now here we are in St. Petersburg. The Hermitage awaits us. As I gather my strength to take it on, I am overwhelmed with gratitude to the Academy for giving us this once-in-a-lifetime opportunity. Not only are we seeing incredible art, architecture, landscapes, and treasures, but also we are meeting incredible people and absorbing their world. This experience has provided me a chance to put aside the routines, habits, and responsibilities of daily life in New York, and immerse myself in a period of freedom, inspiration, reflection, and experimentation. In the moments I have between adventures in the city, I am trying to explore new color combinations and paint application techniques through what I’m calling my daily “Rorschach tests” – small, quick self-portraits that I fold on themselves, blot, and rework, layer upon layer. The process of painting, obliteration, reflection, and reanalysis has allowed me to process much of the visual stimuli and inspiration around me. I am encouraged by Chagall – that through exposure and experimentation, one’s themes, colors, and forms will alter and mature, leading to a richer expression of one’s vision. 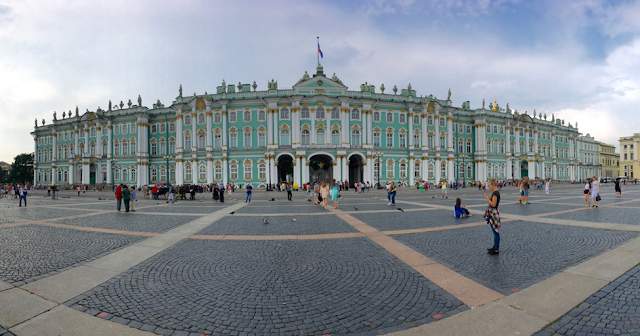 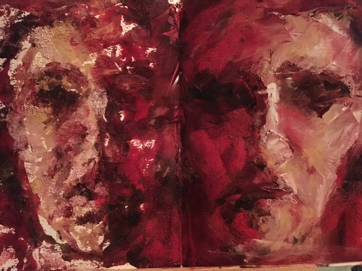 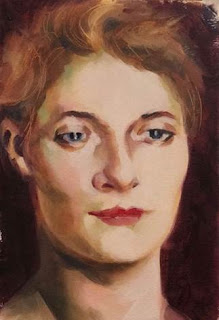 Posted by newyorkacademyofart on Friday, July 29, 2016 No comments: