If you have no idea what Take Home a Nude is and the importance of this event let me explain.  The Academy has many events throughout the year.  Take Home a Nude takes place at Sotheby's, a prominent auction house in Manhattan's Upper East Side and each year many artists and students donate their artwork for Take Home a Nude's silent auction.
Events like these are very important for the future of the school thanks to the supporters and the generosity of the artists.  We the students benefit from all the Academy has to offer.  Current students and alums donate their time and work as volunteers, too. If you see a red t-shirt around, that is one of us! 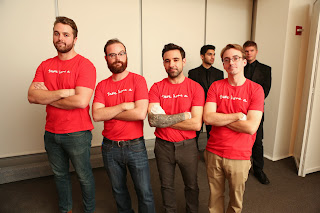 This year I had the opportunity to attend. The space was beautiful and the exhibited artwork was flawless.
Talking with some of the New York Academy of Art's supporters and patrons made me realize how serious they were about seeing our development. I felt truly motivated by their interest in our success. During our conversation they expressed how amazing the artwork created by the students were and how proud they were to see such quality work in the auction.  It made me feel like I was talking with a family member. 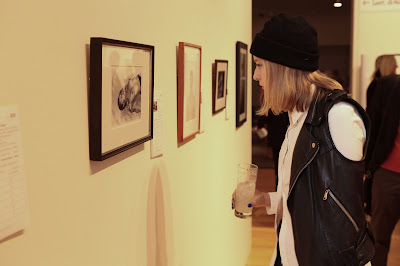 Just a couple of minutes after the opening, the room was filled with celebrities, models, art collectors, personalities from the worlds of fashion and design.

From room to room the silent auction took place and was filled with exciting  moments before each hot lot closed. Each room had a few gallery sections, which were closing consecutively to their respective number, preceding the live auction. 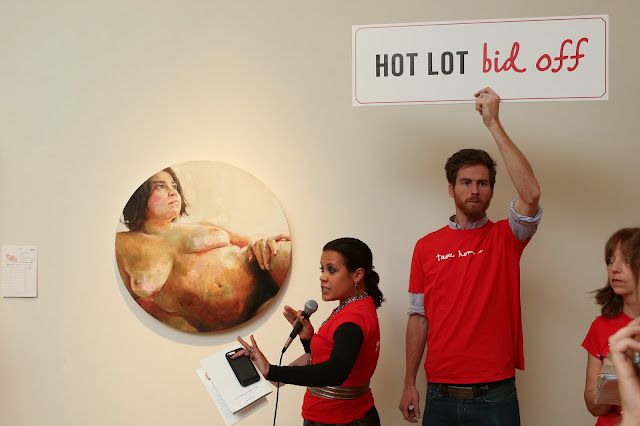 The silent auction happened incredibly fast, and within a few hours all the walls started to be cleared, a sign of great success.   Certainly those pieces found a new home.

By the last hour some of the artwork by renown artists went for live auction.  This year we had works by Walton Ford, Cindy Sherman, Santi Moix. 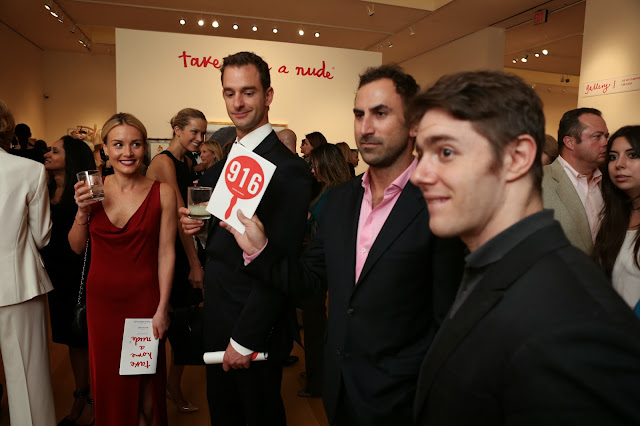 I can't wait for the next event.  Its good to know as students the patrons and collectors have their eyes on us, watching our progress and looking for us to succeed.

Next post I will be introducing you to some of the Academy students and showing a little bit of the diversity the Academy has.

All photographs taken by Nolan Conway.
Posted by newyorkacademyofart on Wednesday, November 20, 2013 1 comment: 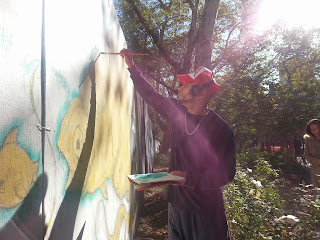 Walking past First Park in the Lower East Side my eyes are immediately drawn to the cool aquas and warm yellows of Robert Plater’s (MFA 2013) aquatic themed mural.  Plater is the first Academy artist selected to participate in First Street Green’s cultural programming. First Park, located at 33 E. 1st Street in Manhattan, is an open art space that serves the Lower East Side community by engaging with contemporary artists, designers, architects, community groups and cultural institutions through a series of programs that activate this busy public space. 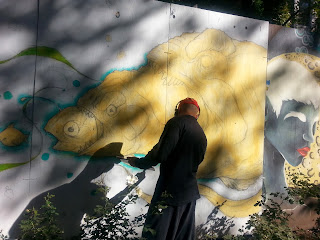 On a warm sunny day, I had the opportunity to watch Robert in action and talk with him about his experiences at and beyond the Academy. “Applying for the First Street Green opportunity was an easy 1-2-3 step process,” Plater recalled.  “I had a food chain idea for the mural.  I submitted my proposal, sent a drawing and link to my website and that’s was that.  It was pretty easy" 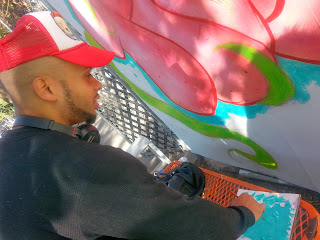 A few months later, Plater is now on site translating his design into a large scale mural. “Painting outside is a different experience.  The visibility is unmatched.  You are faced with many unique challenges and in many ways working against light and aware of its limitations.  The noises are different.  And it’s more interactive.  I’m more excited to talk to people.  The studio can be a chore.  In this open space people don’t even ask to take pictures, it’s public so they feel like the art belongs to them.   I get to do a lot of thinking out here, a lot of talking to myself.  I feel more confident and less doubtful. “ 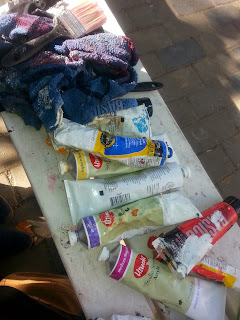 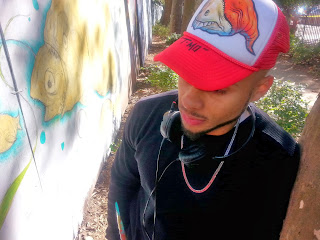 Influenced by street art and graffiti, Plater came to the Academy with one goal in mind:  He wanted to grow as an artist.  He enrolled at the Academy to elevate his natural artistic talents and was attracted to the big names like Jenny Saville and Eric Fischl associated with the school. His goal of growing as an artist, however, was quickly put to the test by his instinct to protect himself.


“In hindsight if I could talk to myself then knowing what I know now, I would say that while the feeling of competitiveness is natural, I learned the most from my fellow students and I would try to engage them more and earlier.  They are like your family.  I would say smile and be open to the conversation.” As for critiques, “I would be more prepared to have my feelings hurt, however, I realized it’s part of the process.  The crits are set up in a way so you can make a comeback and be successful in the end.”


Attending and graduating from the Academy was one of the hardest and most rewarding experiences Plater ever had.  “You don’t realize how good you have it.  For 2 years you are in a safe place and you get used to the structure.  You feel comfortable and everyone knows you.  Paying rent, looking for work and having a studio is all really difficult in life after the Academy.  You have to network on your own.  At the Academy, they really help you meet people. They are really great with providing you with opportunities like the Tribeca Ball and Open Studios.  I was never good at talking to people, but at the Academy it’s easy to do that.“ 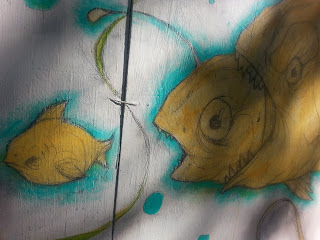 Plater agrees it’s great to question the relevance of your work and be forced to push boundaries.  In his work, he has applied the Academy’s rigorous training, teachings and references artists like Michaelangelo and Durer.  When asked about his favorite classes, Plater talks about JP Roy’s class Painting from Imagination. “It felt free and inspired my confidence.  When I was younger I did so much drawing that was simple by design and I drew from my head.
If I could have the Academy offer any additional class it would be Drawing from Imagination.  Having this as a tool for an artist, being able to do portraits and full figures from memory, is extraordinary and I can’t say enough about it.“ 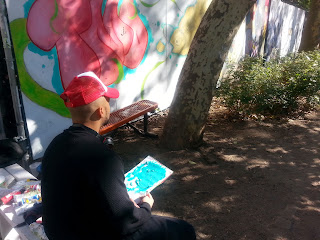 For more details on the artist take a look here Robert Plater (MFA 2013).
Posted by newyorkacademyofart on Wednesday, November 13, 2013 4 comments: