EDITOR'S NOTE
After the Academy posted a response on this blog to facebook's removal of Steven Assael's artwork (Jan 31, 2011, 5:22pm), The New York Times, Gawker, MSNBC, The Cornell Daily Sun, The Register, ARTINFO, and other news sources have covered this story. Please see below for photos facebook has removed from the Academy and Academy Alum's accounts.

Where do you draw the line?

JUNE 13, 2011, 3 months later...
After three email messages of "photo removed" received today (in these instances, facebook does not tell you which photo has been removed, so now we're on the hunt for them...), facebook - in an unexpected turn - sent us this "Please Review" notice upon login:
Of course we don't think this content violates facebook's policies. The images that the New York Academy of Art (an internationally-respected graduate school teaching traditional skills and techniques in the service of vital contemporary art with an emphasis on the human figure) has posted are of student, faculty and alumni artwork. The Academy was founded by Andy Warhol, has been visited by President Clinton, and even enjoyed patronage conferred by HRH Prince of Wales.
Where facebook has become an entity that can affect real cultural ripples, as in the "toppling" of Hosni Mubarak, how does the perception of artwork weigh in? The question remains: how and who shall evaluate what - in a public forum - the public may see?
Art has always asked and responded to this question. If the name of the game is communication and the spread of ideas, should a social network use different criteria to evaluate (art) content than an art history book or a museum?
August 12, 2011:
"The needs of many outweigh the needs of few..." 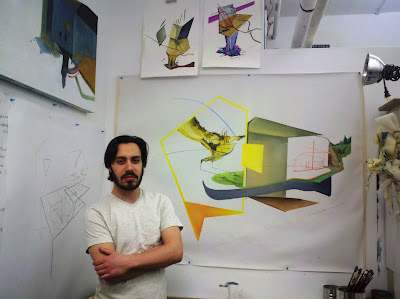 Jon Beer (Painting, class of 2012):
"My work is an exploration of memory and cognition;
I'm creating spaces and worlds where the past and present exist simultaneously. 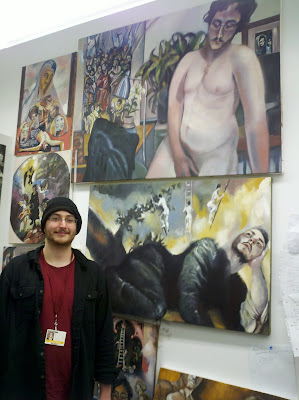 Jacob Hicks (Painting, class of 2012):
"I'm focused on the meaning of my name - Jacob - which means 'to supplant.'
I supplant my visage and personal narrative into the continuously
reproduced mythologies of Western culture." 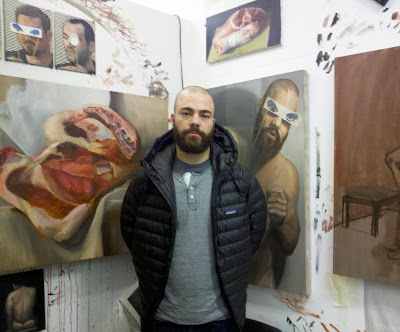 Nicolas Holiber (Painting, class of 2012)
is currently painting a series of meat still lives that are about
our relationship to the animals we eat. Says Nic, "Eating is a moral act inextricably
bound to killing, and the implications and contradictions that arise out of that situation."
Posted by L on Friday, February 25, 2011 No comments:

A Review by Maria Kozak (MFA 2011)
A new year of art is upon us. Though it may have gotten off to a slow start; blame the blizzards, there are some exciting things on the horizon. So shovel yourself out of your winter doldrums and go see these shows.

Pace has several formidable artists currently showing; Tara Donovan is already open in Chelsea. The show features Donovan's intricate drawings that are painstakingly rendered environments unto themselves. Donald Judd opens Thursday. Judd is arguably the the father of minimalist sculpture and is singlehandedly responsible for making Marfa, TX the art destination it is today. The show will focus on lesser known materials that Judd introduced into his work during the final decades of his life. Also look forward to Zhang Huan opening at the beginning of the March.


Richard Butler hypochondriacatthegramercyparkhotel opens Friday at Freight + Volume. The British artist/musician (Psychedelic Furs) paints hauntingly elegant portraits of coming of age youth with a minimalist palette and space reminiscent of Bacon. I am most seduced by the way he uses oil paint to depict surfaces like latex and bubble wrap when masking his subjects.


Also in Chelsea go see Robin William's show The Rescue Party at P.P.O.W. William's work is a little Yuskavage, a little Currin, and a little early Micah Ganske. It is not to be missed by anyone interested in current figuration.

In museum news, there is a mid-career retrospective of George Condo's work that just opened at the New Museum. Condo's work constantly borrows from the historical cannon of western art as he subverts old and new masters.

Finally, go see the Contemporary show at MoMA. There is a fantastic piece by everyone's favorite censored artist, David Wojnarowicz. The show is an investigation on provocative artwork discussing economics, gender and ethnicity since the late 60's.

Jeanne Silverthorne is an artist who lives and works in New York. She is best known for sculptures cast in rubber, but her installations often include photographs, videos and kinetic elements as well. She has exhibited at the Whitney Museum of Art, the Museum of Modern Art, the San Francisco Museum of Art, the Albright Knox Museum, among others, and her work is in the collections of those museums as well the Leum Samsung Museum, Korea, FINAC, Denver Museum, Weatherspoon Museum, Houston Museum, Sheldon Museum, the Contemporary Museum Honolulu, and the RISD Museum. She is represented by McKee Gallery in New York and Shoshana Wayne Gallery in Los Angeles. Reviews and articles about her work have appeared in Artforum, Art in America, Art News and Sculpture Magazine. A feature on her projects is scheduled to be published in a forthcoming issue of Sculpture Magazine. This year she has been awarded a Joan Mitchell Foundation Award. Since 1993, she has taught at the School of Visual Arts and for seven years she was on the faculty of the MFA program at Columbia University

All lectures are free and open to the public.
Watch the blog for upcoming lectures including Donald Kuspit & Phoebe Hoban.
Click here for a complete schedule of SPRING 2011 Lectures


The NYAA Library has these resources available exclusively for NYAA students.
Electronic access to Academic OneFile and GALE (links only accessible in the NYAA campus):

Posted by Librarian and Archivist on Monday, February 14, 2011 2 comments:

Email ThisBlogThis!Share to TwitterShare to FacebookShare to Pinterest
Labels: lectures

LIVE FROM THE STUDIOS!

Join Guno in his studio when we broadcast
LIVE FROM THE STUDIOS at the New York Academy of Art.

Watch & Chat LIVE Tues. 2/15/11 at 1pm EST
http://www.nyaa.edu/nyaa/studentlife/livefromthestudios.html
Tune in for a rare glimpse of the artwork Guno creates as a 2nd year drawing major. Spread the word - it's a great way for any prospective student to get an "inside view" of the Academy!

Guno Park was born in Korea; he moved to Canada with his family at the age of 9 and lived there for 20 years before moving to New York. Guno has studied various methods of drawing; oriental calligraphy, industrial design, graphic design, classical animation, and fine art. Recently, he has been exploring the imagery behind his childhood dreams, cognitive architecture, and the hemispheres of the brain. Through these images, Guno hopes to find deeper and clearer answers to his biggest questions about life and art.
Posted by newyorkacademyofart on Monday, February 14, 2011 No comments:

From Columbus, OH, O’Reilly received a BFA from the Columbus College of Art and Design. After a year of attending New York Academy of Art, he was awarded a residency at the Leipzig International Art Programme in 2009 and exhibited there. John's work has been in group shows at galleries including Danese's"Other as Animal," curated by April Gornik in Chelsea, New York City. O’Reilly’s work focuses on universal parallels. His work explores a wide range of issues from comparative vertebrate anatomy to sociology, psychology, genealogy and familial development. Through the manifestation of drawing and sculpture, his work asks the viewer questions of perception in how we as human beings relate to one another.

While you’re in the middle of your Fellowship year, what do you find challenging and satisfying?

As a student getting ready to graduate, I had a specific line of thought I wanted to develop. Using the beginning of my fellowship year to “look inward,” I’ve been able to develop that strain of thought and also to “look outward” by seeing galleries and museums and other artists’ studios. Now I want to digest it all, react visually, and see how it adds to my original intent. My work explores “breath.” The intake, the absorption, the release… the pulse is getting stronger the breaths are getting deeper.

There are now so many “shadows” of ideas that are lingering and morphing into my work, I want to make more projects to elaborate… but the studio space I occupy is filling up quickly and I wish I had more area to create more work. I don’t want to discard anything I’ve started, but I have to – due to my space and time limitations (the Fellows’ Exhibition is coming up in September 2011) – be more selective about which themes I pursue.


It’s a constant continuation and evolution. The more things I do, the more they inform each other and reveal a dialogue with myself. I find satisfaction in letting my intuition take over in the process. It becomes meditative where everything slows down and I’m able to sift through ideas and discoveries that manifest themselves in a physical object. 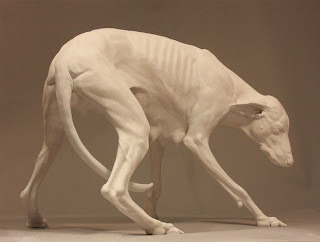 From the distance of a map-maker

By Emily Adams, MFA 2011
The recent talk of censorship in the arts has me thinking more about the relationship between map-maker and mapped; gardener and garden; artist and artwork.
I came across early survey maps of the American West designed by the US Department of the Interior. A neatly organized drawing carefully, lawfully delineates a landscape of an area of New Mexico in the nineteenth century stages of American ‘land ownership.’
Around that time, the US government moved the Navajo people to an internment camp in Fort Sumner while government officials remapped their landscape along reservation borders. Navajo landscape changed from something lived, known from ground perspective, marked by its four sacred mountains; to a map, a paper document depicting, in aerial perspective, space as geometrical patterns and a carefully rendered line. “We will make a boundary line outside of which you must not go… you must live at peace,” said General William Sherman**.


As I develop my farmland images in paint (departing from my earlier works on photographs), I’ve been thinking more about the way maps feel. I get a sense of awe with the aerial view of farmland because what I see vacillates between map and fields. In the true-to-form representation of the landscape as photograph or painting, the image may still be read as non-objective.
It it is interesting to me how the distance between the map-maker and the thing mapped, the dissociation of the person from the place or thing they are arranging, allows for a relationship in which the subject is a non-objective thing to the map-maker. Some contemporary voices note the violence that can arise from this distance; that the agricultural policies and practices responsible for the farm-grids are violent, environmentally and socially; that there was violence in the homesteading maps, violence in the reservation mapping, violence in Indian assimilation policies (the mapping of one culture’s visual presentation onto another)*.
As for art and artists, I’m looking at the extremes of Burtynsky’s landscapes, which hover in the sublime space between beauty and violence, and Agnes Martin’s non-objective paintings—maps of a ‘clear mind,’ as she once said. Now, I'm asking myself: How might my own paintings represent this space between map and the thing mapped? And what kinds of maps do I have access to, that are personal enough that I can use without appropriating; that I can engage in without losing sight?
*The article is written by a student who will be visiting New York City in the Spring on a trip organized by my former colleague, Joan Levitt. I will be joining them, and helping to organize a tour of the Met.
**From Peter Iverson's 'Dine: A history of the Navajos'. University of New Mexico Press. 2002.
Posted by Emily Adams on Monday, February 07, 2011 1 comment: