Marilyn Minter’s first retrospective exhibit at the Brooklyn Museum is so much more than skin deep bling. It reflects the obsession with western ideals of beauty, the culture of fashion, notions of femininity and the female body. Beginning with intimate and haunting photographs of her mother, once a southern belle, Minter eerily captures a maniacal fixation with one’s reflection and the inevitable ravage of time on the human body. The woman in the photos is smeared in layers of makeup and with a vacant stare she reminds us that we may all be sharing those feelings someday, as we gaze at our aging selves in the mirror.

The large scale paintings Little Girls and Big Girls focus on the female body and the male gaze. Big Girls depicts the infamous 1957 photo of Italian actress Sophia Loren and American actress Jayne Mansfield, in which Mansfield’s bosom is precariously encased by a plunging neckline. Both actresses were considered the epitome of beauty in the 1950s and 1960s. They were women deemed worthy of  worship, envy, and desire. In Little Girls, Minter is showing us the symbolic version of these ladies as children, in all their youth and innocence; unaware of their future objectification.

In later works, such as Clip and Dirty Heel, Minter confronts her audience with massive depictions of beautification tools, magnified for greater effect. Throughout, there are also insights into the artist’s creative process. Bisecting the galleries, there is a narrow hallway with a large vitrine, showing old sketches, preliminary studies, and collaged photo references for future works.

In the age before Photoshop, these give us a glimpse into the planning and production of her large scale close-ups. Hanging nearby is a collection of photos commissioned by Playboy magazine that depict graphic close ups of pubic hair being groomed. These images are candid shots of a woman’s private rituals exposed for all to see. Minter aims to strip the veil of secrecy to the process of self-grooming - the raw reality of the things we usually conceal.

The monumental Blue Poles, reveals unruly and unplucked brow hairs, loud freckles and a glaring blemish, alongside a pair of eyelids with uneven metallic and glamorous eyeshadow.

The sky-high heel comes alive in the video Smash. As you walk into the final viewing room, you are greeted by a closeup video of a pair of feet uncomfortably squeezed into bejeweled open-toe high heel shoes. They are metallic silver and stomp into metallic liquid. They eventually shatter a pane of glass, symbolically the same glass that separates the audience from the action. As they turn, a loose string of crystal embellishments swing around and smack against the foot. Overgrown painted toenails decorate toes that appear to be in utmost pain. The expression “suffer for fashion” comes to mind, and Minter is throwing it back at all our faces. We in the audience are guilty as charged - for not only feeding into the myth, but glorifying and luxuriating in it.

Posted by newyorkacademyofart on Wednesday, November 16, 2016 No comments: 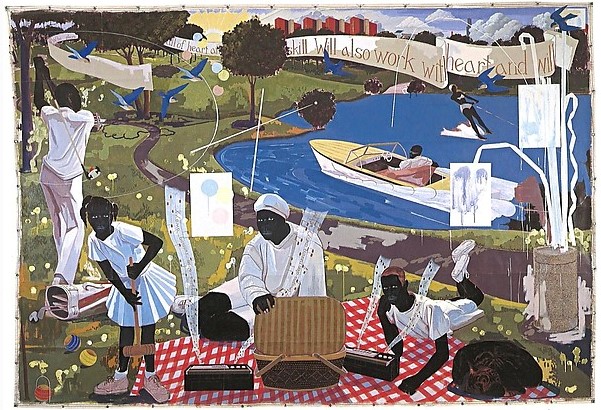 It takes a special artist to elevate craft store glitter to a high art and Kerry James Marshall does just that. With not a sparkle out of place, Marshall is a master at using this embellishment as a framing device for his paintings, bridging the gap between the fantasy world of the icon and the reality of his subjects. Gulf Stream (2003) depicts a black family leisurely sailing all framed with a glittery rope giving the whole painting a decidedly post-card feel. The inspiration behind it, Winslow Homer’s Gulf Stream (1899), shows a bleak original scene, a black man in a small boat surrounded by sharks instead of decoration. 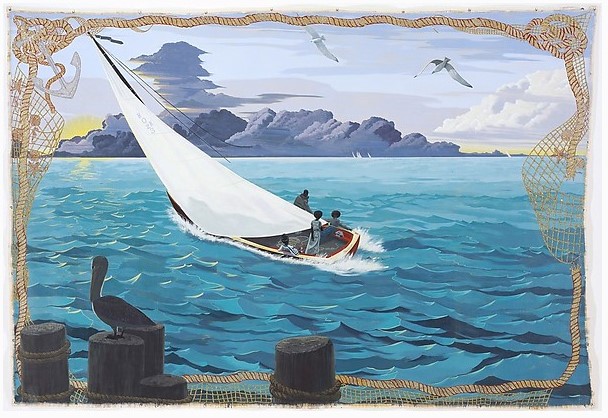 Marshall is a master of decisiveness. His strong themes communicate with the physical choices he makes with his palette, painting language, and symbolism. A black person is literally black, and unapologetically so. Depictions of a painters palette are often larger than he/she is and are an abstract painting in and of themselves. A narrative of life in housing projects is scattered with text, verse, and the lyrics and notes of whatever tune they are listening to at the picnic. Marshall disregards the esoteric language of most contemporary art and embraces a clarity of narrative, metaphor, and symbolism rarely seen outside the world of illustration. 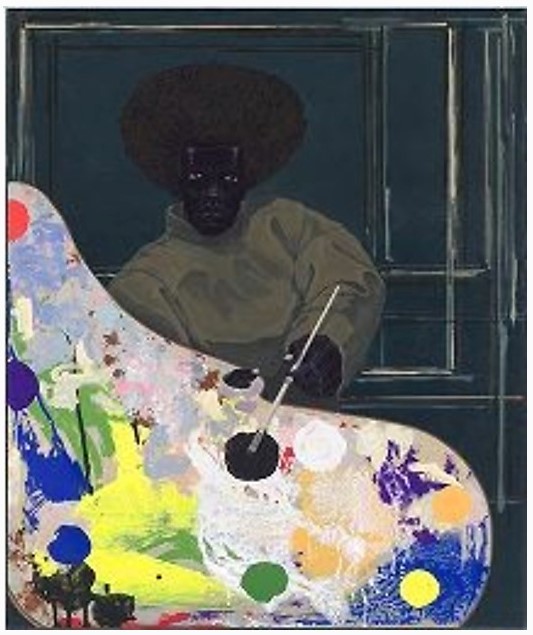 The Kerry James Marshall retrospective spans 2 floors of the Met Breuer and is on through January 29th 2017.
Posted by newyorkacademyofart on Wednesday, November 09, 2016 No comments: