People often tell Cecily Brown that she paints like a man from the fifties. Her response? “Well, somebody’s got to do it."
Her large-scale, remarkably tactile oil paintings hover at the intersection between abstraction and figuration, and are often compared to Abstract Expressionist works. Based on the aggressive way she puts down paint and her star status in the art world, one might assume Cecily Brown would be a little intimidating in person.

However, when Cecily arrived at the Academy two days before Halloween, I immediately felt at ease. She has a warm smile and kind way of speaking, and carried a shopping bag filled with her five-year-old daughter’s Halloween costume. As we rode the elevator to the fourth floor, I asked her what her daughter was going to be – “A fox,” she answered. “My husband and I are dressing up as the parent foxes… My daughter’s been talking about it for the entire year.”
Cecily came to the Academy to conduct critiques as part of the visiting critics program. Critiques are just what you would imagine - other artists entering your studio and giving you feedback about your work. Sometimes the process is inspiring and encouraging, and sometimes it’s downright deflating. Every critic has something unique to say – some inspire new ideas, others help resolve specific technical issues, and some leave an artist feeling confused and overwhelmed. It’s not unusual to receive back-to-back critiques that completely contradict one another. Although critiques can be frustrating at times, critiques help artists clarify their direction, because they force us to choose what advice to listen to and what to tune out.

After looking around my studio for a few seconds, Cecily asks me was what kind of paint I use. I show her my paints, which include a variety of brands, and some large tubes of Winton, Winsor Newton’s student grade brand.
“Okay,” she says. “First thing – don’t use Winton. Ever. It’s so shit. It’s just waxy and awful and ruins everything. I think it might be impossible to make a good painting using Winton.”
She then zeroes in on a large painting I’d done in my Painting 3 class of a nude model sitting with a dog, (a life sized German Shepard stuffed animal, to be exact). “What’s that red there? And this green thing?” she asks, pointing to an area behind the model. I explain that this is a painting of meat, (by Academy third year fellow Shangkai Kevin Yu), which we’d set up behind the model. The green is a cactus. “Hmm. This is my favorite part,” says Cecily. “The most interesting part is the most obscure part, where you can’t quite tell what’s going on.” She pauses, and then continues. “I would just paint right over the figure… But of course, I would say that,” she laughs.
Brown creates a unique aesthetic reality by working with a constant conflict between her desire to paint the figure, and her refusal to allow the figure to remain. “I never want to be saying “this is the way it is” – when I feel like I’m naming something in too final a way, or it’s too pinned down, that’s when I feel I have to say “but is it really like that?”
She moves on to another painting, a work in progress that had begun as three figures in a forest but is starting to resemble a cow. She points to an area at the bottom right, a purpleish blob that I hadn’t really considered. “This is like Francis Bacon’s rabid dog,” she says. “Go with that.”
As Brown paints, she both imposes her will upon the painting, and lets the painting tell her what it needs. “There’s always another story going on that’s not the main story – look at the way these marks are coming together,” again, referring to the dog.  “It’s subtle, but may be more important than the rest.” She urges me to squint, and look at the painting in a “gentle” way. “What might be there that you’re not immediately seeing?”
I ask her about appropriating from other artists. “Oh yeah, I take figures from art history and use them… Like I’ll take a Goya figure, and then a Bacon figure… But it’s important to mix it up between artists so it doesn’t become too derivative,” she says.
The old adage goes, “good artists borrow, great artists steal,” and Cecily Brown has no shame in stealing. “I have been looking at Munch and Beckmann,” she says. “I find as I get more assured of the fact that I can paint, I don’t mind letting my influences show.”
Brown is most drawn to figurative paintings from the past. Her influences are mostly very old dead male painters – Brueghel, Bosch, Goya, Titian, Rubens… “These are people who I’ve loved for years, and I get so much out of – they seem very much alive to me,” she has said. But of course, she also tends to paint like a man from the twentieth century. She loves Beckmann, Bacon, Baselitz, de Kooning, Guston… and many German painters. “I consider myself an honorary German painter,” she says. Much has been made over the fact that Cecily Brown is a woman working in this aggressive, male way of painting, but she’s said this isn’t really of much importance to her. “Inevitably it’s got a feminine point of view because I’m a female, but studio is one place I’m not really conscious of my gender... I’ve never set out to do x as a woman - you just do your work.”
I’m curious about Cecily’s process, so ask her about how she begins a painting. “I just start,” she answered. “I never do any kind of prep – I just go right into it. Sometimes I make drawings about halfway through… but not usually.” Cecily doesn’t start with a clear idea of what a painting will look like, and usually begins by laying down a wash of colour. A form is suggested very quickly, and then she responds to what the painting is giving her. “I don’t have the angst that some people do in front of a white canvas, the problems for me start later. I begin, I don’t know what’s going to happen, I see what’s going to happen based on first few marks. It’s a very organic process.” She recommends working on several canvasses as a time, and seeing how they influence each other. “I’m more focused when I’m more spread out.”
“I think you need to bring some areas more into focus, and clarify parts of the abstractions,” she tells me. She looks at my most recent painting, of three figures on horseback in a landscape. “It’s a bit muddy at the front. All this green is the same, and the head of this figure is clear but then it kind of dissolves into mud. If you add something at the front to clarify it, maybe some red, that could help. Have you looked at Delacroix? He’s great at that.” She continues. “You don’t want the left and right to be the same.” She advises me to look at every corner of the painting and make sure it’s different. “And try bringing different tempos to your painting,” she comments. “Paint really fast one day, and then go back in and paint some areas slowly, more carefully.” Brown tends to paint quite quickly and frenetically, but that comes after a long time of sitting, staring at the paintings, trying to get clues as to how to proceed. “I spend a lot of time of looking slowly so that I can paint quickly.”

The goal in the second year at the Academy is to develop a cohesive body of work to present to the world. I think a lot of people who don’t make art on a regular basis assume that a given artist has a natural “style” or way of making things, and that that’s just the way it is. In reality, though, the more skill you have, the more options you have available to you, and the more you might feel like you can be 50 different artists doing 50 completely different things. For example, I’m mostly doing abstract painting these days, but took a master class with Will Cotton last weekend and made a the most rendered portrait I’ve ever painted.
The “cohesion” factor comes from making conscious decisions about what to emphasize and what to let go of in one’s work. This semester, I’ve begun to realize that what I’m best at and most interested in is working in a fairly intuitive manner. When I start a painting with a rigid idea of how I want it to look at the beginning, and follow this program through to the end, my work tends to look lifeless, or “choked up,” as my thesis advisor commented. As trite as it may sound, I am learning that my strength comes when I am able to let go, and follow my intuition. I found having Cecily Brown come into my studio incredibly helpful, because she had specific formal ways to approach this sort of painting. Cecily is an inspiring example of an artist who works in this way, but whose work still demands a tremendous amount of rigor. Her decisions are still highly formal and aesthetically based. Although she certainly throws paint around, she isn’t just throwing it around for the sake of it. She may not have a map when she begins, but trusts that she’ll be able to figure out the painting as she goes along. 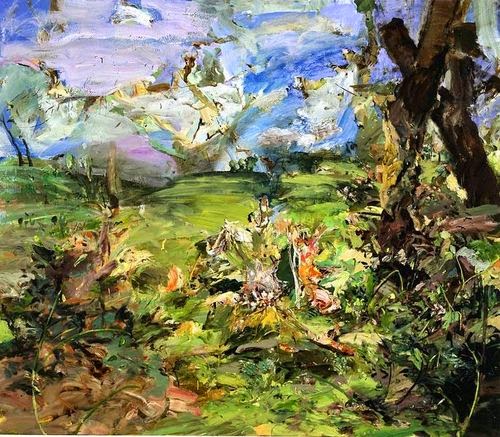 Claire Cushman (MFA 2015) is a painter and Social Media scholar with a penchant for blogging.  From time to time check in on the Academy's blog to read more entries from Claire throughout the year.
Posted by newyorkacademyofart on Tuesday, November 18, 2014 No comments: Links to this post