An inside look: The Academy Open House Experience 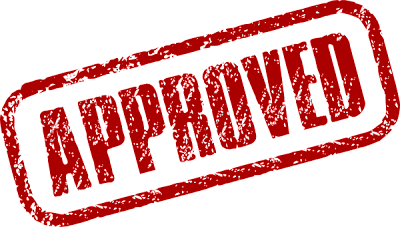 Once I was accepted to both the New York Academy of Art and the Pennsylvania Academy of Fine Art, I started planning my visits to the schools. First up was NYAA. I contacted the Admissions office to find out when I could tour the school. They told me about an upcoming open house for prospective students that I could attend. It was only 2 weeks away! I had to buy a very last minute, VERY expensive ticket to New York. You see, there aren't that many flights coming out of ol' Wichita, Kansas. Luckily, I had a friend who let me crash at her place. I also kept weekly correspondence with the admissions director who's been very prompt (and kind) with answering my questions/concerns. The open house presentation was extremely informative and very honest. I got to walk around and see the entire school including all the studios and the students' work! The work was incredible. I felt like it was the kind of work I wanted to make. The first year studios are not huge, but since the first year will be a "boot camp", it should suffice. My tour guide was super friendly and answered all of my hundreds of questions. We began discussing how I found out about the school in the first place.

I lived in New York for 4 years and had never heard of it before this year. Or perhaps I wasn't looking for it, since I only started to research schools when I knew for sure when I wanted to enroll. I already had my top ranked schools picked out, based on reputation. But when I visited one of them, it wasn't what I had expected. So I began researching other avenues, like the CAA Directory, a guide to all visual arts grad programs, which I found out about through my undergrad academic advisor/art professor. Then I started going through my bookmarked favorites, some contemporary artists' work that I had saved over the years. When their work stood out to me, I looked up their bios on their websites. I noticed a trend: a lot of them had attended the New York Academy of Art. Alyssa Monks, Caitlin Hurd, Christian Johnson, just to name a few. Here's where I became a stalker :) I found out that a professor from my college graduated from NYAA. I contacted her via phone and asked about her experience with the school. She had all positive things to say and told me that she actually chose NYAA over Yale. She gave me the name of an alumna who's currently enrolled at the school. I contacted her via facebook and interviewed her as well. At this point, I was dumbfounded about how I couldn't have known about this marvelous little place. I read about the history, which gave them even more brownie points. Andy Warhol was a co-founder. Um, hellllo. This must be the art school society's best kept secret.

I guess I'll find out... because I'll be attending this fall! No need to visit any more schools. I found mine. :D
Posted by newyorkacademyofart on Thursday, November 17, 2011 1 comment: Links to this post 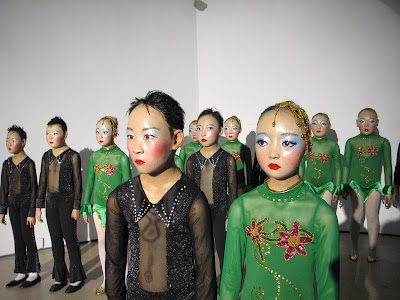 We have experienced a mammoth amount of work here in China.  It has been a struggle in trying to make sense of the art world here, to put it in concise terms, and define the trajectory of its fast growth and movements.  Our conversation in the studio has circled around the core idea of art as Experience, and i have gathered that there is a real attention here on Experiencing Art.  Through the design of the installation, space, timing of the narrative, and drama of the object, the gigantic warehouse spaces in Beijing are perfect for designing an experience for the audience. 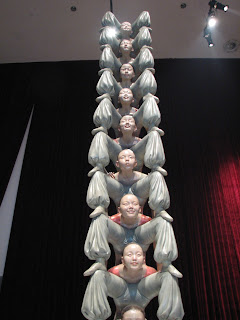 Yesterday we visited the Today Art Museum.  There were two solo shows by female sculptors Xian Jing and Li Wei.  Xian Jing's show "Will things ever get better?" began with a huge 100 foot tall space presenting contorted knots of acrobats.  They were composed on 30 foot tall welded pedestals, stacked on top of each other, or quietly poised and meditating before taking action.  An ambitious feat of sculpture, these resin sculptures painted meticulously with acrylic were performing for us, smiling, waiting tensely for our applause. 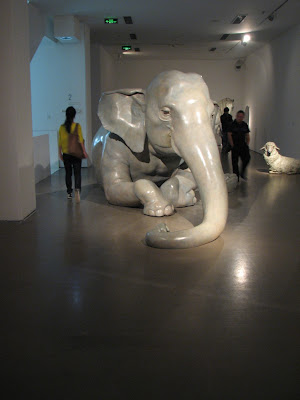 This gallery was divided by a deep red velvet curtain which behind it held more fantastical works. Dramatically lit, life size painted animals like the "immortal one", a dopey elephant, big eyed horse, sheep, and a group of seals.  Installed in a smaller space, you were at level with these animals, intimate and up close to the pathetic and hopelessness of their pose. There was a distance in their hollow gaze, unaffected by your presence. It simulated the detachment and exhaustion of animals at the zoo. 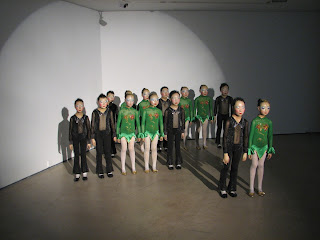 In another warehouse space at Today Art Museum was Li Wei's Solo show "Hero".  Unaware about any of this artist's ovure, I  walked into a long hall that led into a large open space.  All I could see ahead of me were two kissing fire extinguishers and I thought to myself, "Please don't let that be the work of art."  As I turned the corner there were 20 sculptures of Chinese girls and boys in dancing costumes, big glass eyes staring eagerly, nervously at me.  A huge theater spotlight beamed on their stage frightened bodies.  I felt bad for these little ones, knock-kneed, pleading internally not to be judged and awkward in their costumes that can't hide the anxiety of their budding adolescence.  A gaggle of young persons walked in, giggled and pointed at the sculptures. Perfect. 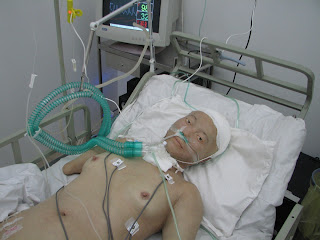 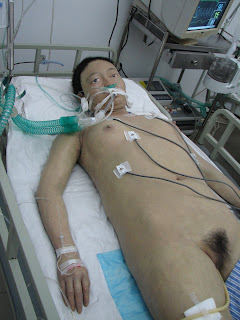 Walking out, I was led into the spaces upstairs.  First there was a flock of flared peacocks flirting with each other on astro-turf.  But to my right was room with a beeping noise that persuaded my attention.  I entered the glass door to find four beds with near death figures in a tangle of medical tubes and sensors on their bodies.  It smells sick, stale, and sterile like a hospital.  Blaring, insensitive florescent light floods the 15'x10' small space, leaving me to confront the bodies before me.  Fluids are bubbling through tubes and regulators while I try to distinguish the life left in these forms.  Flesh in complete repose, their naked bodies sprawled open in a tangle of bed linen don't reveal their sex until you follow the lines of their tubes and find penetrating catheters.  I am repulsed and drawn in simultaneously.  As I aim to photograph I stall; feeling at my core wrong about documenting these barely alive figures.  Standing bedside between two of the figures my head darts back and forth between their glazed eye contact.  Tubes billow out of their mouth and dismembered bodies; I am stunned between their utterly silent stare.  A man comes in and begins pulling cords out of the machines, and the beeping of their life force goes quiet, their bubbling fluids cease.  I look at him in shock, "What are you doing! Why are you pulling the plug!?" He smiles back at me; responding, "Hel-lo!" I notice another gallery attendant ready to lead me out because it is closing time.


Adrenaline pumping, I exit the gallery, beaming from the empathy I felt for the figures and the complete submersion I experienced. The powerful simulation in both rooms; an endearing anxiety with the costumed adolescences, and the transfixion on the bodies with their wavering mortality preserved by pumps and tubes.
Two theatrical sculptural experiences.  Xian Jing's sculptures performing perfectly for her audience; and the hollow emotion in her beautiful animals bearing the same contradiction that one experiences at the zoo of looking at trapped majestic creatures.  The simulation in the installations of Li Wei's life-cast figures conjured emotions from those scenes in our own lives and flooded the viewer with empathy.
See more pictures from the show below: 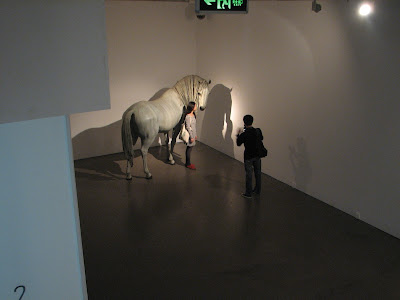 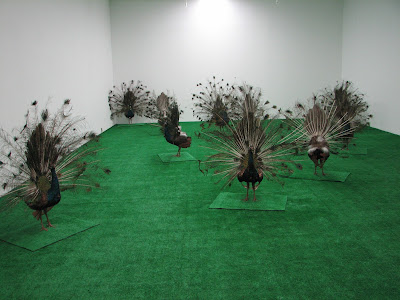 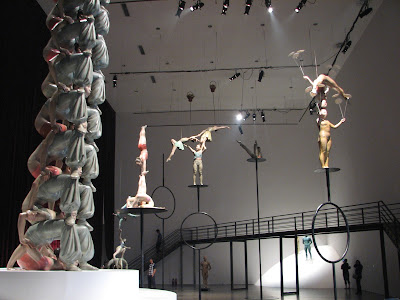 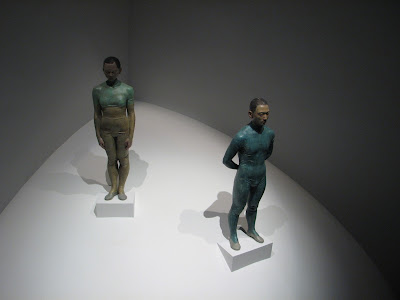 Posted by newyorkacademyofart on Monday, November 07, 2011 2 comments: Links to this post